Investigators at a major research institution have discovered the
heaviest element known to science. This startling new discovery has been
tentatively named Administratium (Ad).

These 312 particles are held together by a force called morons, which
are surrounded by vast quantities of lepton-like particles called peons.

Since it has no electrons, Administratium is inert. However, it can be
detected as it impedes every reaction with which it comes into contact.
According to the discoverers, a minute amount of Administratium causes
one reaction to take over four days to complete when it would normally
take less than a second.

Administratium has a normal half-life of approximately three years; it
does not decay but instead undergoes a reorganization in which a portion
of the assistant neutrons, vice neutrons, and assistant vice neutrons
exchange places.

In fact, an Administratium sample's mass will actually increase over
time, since with each reorganization some of the morons inevitably
become neutrons, forming new isotopes. This characteristic of moron
promotion leads some scientists to speculate that Administratium is
formed whenever morons reach a certain quantity in concentration. This
hypothetical quantity is referred to as the "Critical Morass".

You all know about the Darwin Awards - It's an annual honor given to the
person who did the gene pool the biggest service by killing themselves in
the most extraordinarily stupid way. Last year's winner was the fellow who
was killed by a Coke machine which toppled over on top of him as he was
attempting to tip a free soda out of it.

The Arizona Highway Patrol came upon a pile of smoldering metal embedded
into the side of a cliff rising above the road at the apex of a curve. The
wreckage resembled the site of an airplane crash, but it was a car. The type
of car was unidentifiable at the scene. The lab finally figured out what it
was and what had happened.

It seems that a guy had somehow gotten hold of a JATO unit (Jet Assisted
Take Off - actually a solid fuel rocket) that is used to give heavy military
transport planes an extra "push" for taking off from short airfields. He had
driven his Chevy Impala out into the desert and found a long, straight
stretch of road. Then he attached the JATO unit to his car, jumped in, got
up some speed and fired off the JATO!

The facts as best as could be determined are that the operator of the 1967
Impala hit JATO ignition at a distance of approximately 3.0 miles from the
crash site. This was established by the prominent scorched and melted asphalt
at that location. The JATO, if operating properly, would have reached maximum
thrust within 5 seconds, causing the Chevy to reach speeds well in excess of
350 mph and continuing at full power for an additional 20-25 seconds. The
driver, soon to be pilot, most likely would have experienced G-forces usually
reserved for dog-fighting F-18 jocks under full afterburners, basically
causing him to become insignificant for the remainder of the event. However,
the automobile remained on the straight highway for about 2.5 miles (15-20)
seconds before the driver applied and completely melted the brakes, blowing
the tires and leaving thick rubber marks on the road surface, then becoming
airborne for an additional 1.4 miles and impacting the cliff face at a height
of 125 feet leaving a blackened crater 3 feet deep in the rock.

Most of the driver's remains were not recoverable; however, small fragments
of bone, teeth and hair were extracted from the crater and fingernail and
bone shards were removed from steering wheel.

Only goes to show... Speeding never killed anybody- Stopping did. 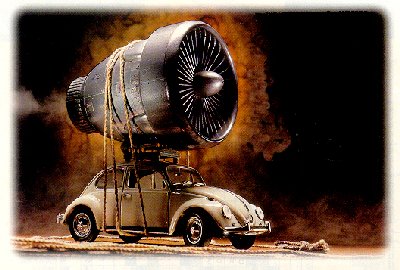 This story is clipped from the recent Darwin awards, which people
get for doing something incredibly stupid. This really is a true story.

Larry Walters is among the relatively few who have actually turned their
dreams into reality. His story is true, as hard as you may find it to believe...

Larry was a truck driver, but his lifelong dream was to fly. When he
graduated from high school, he joined the Air Force in hopes of
becoming a pilot. Unfortunately, poor eyesight disqualified him. So
when he finally left the service, he had to satisfy himself with watching
others fly the fighter jets that crisscrossed the skies over his backyard.

As he sat there in his lawn chair, he dreamed about the magic of flying.
Then one day, Larry had an idea. He went down to the local
Army-Navy surplus store and bought forty-five weather balloons, and
several tanks of helium. These were not your brightly colored party
balloons, these were heavy-duty spheres measuring more than four feet
across when fully inflated. Back in his yard, Larry used straps to attach
the balloons to his lawn chair, the kind you might have in your
backyard. He anchored the chair to the bumper of his jeep, and
inflated the balloons with helium. Then he packed a few sandwiches
and drinks, and a loaded BB gun, figuring he could pop a few balloons
when it was time to return to earth.

His preparations complete, Larry sat in his chair and cut the anchoring
cord. His plan was to lazily float into the sky, and eventually back to
terra firma. But things didn't quite work out that way. When Larry cut
the cord, he didn't float lazily up; he shot up as if fired from a cannon!

Nor did he go up a couple hundred feet. He climbed and climbed until
he finally leveled off at eleven thousand feet! At that height, he could
hardly risk deflating any of the balloons, lest he unbalance the load and
really experience flying.

So, he stayed up there, sailing around for fourteen hours, totally at a
loss about how to get down.

Eventually, Larry drifted into the approach corridor for Los Angeles
International Airport. A Pan Am pilot radioed the tower about passing a
guy in a lawn chair at eleven thousand feet, with a gun in his lap....
now there's a conversation I would have given anything to have heard!
LAX is right on the ocean, and you may know that at nightfall, the
winds on the coast begin to change. So, as dusk fell, Larry began
drifting out to sea. At that point, the Navy dispatched a helicopter to
rescue him, but the rescue team had a hard time getting to him
because the draft from their propeller kept pushing his home-made
contraption farther and farther away.

Eventually, they were able to hover above him and drop a rescue line,
with which they gradually hauled him back to safety. As soon as Larry
hit the ground, he was arrested. But as he was led away in handcuffs,
a television reporter called out, "Sir, why'd you do it?" Larry stopped,
eyed the man, then replied nonchalantly, "A man can't just sit around!"

And this is not supposed to be funny:


The European Commission have just announced an agreement whereby English
will be the official language of the EU rather than German, which was
the other possibility. As part of the negotiations, Her Majesty's
Government conceded that English spelling had some room for improvement
and has accepted a 5 year phase-in plan that would be known as "EuroEnglish": --

In the first year, "s" will replace the soft "c".. Sertainly, this will
make the sivil sevants jump with joy. The hard "c" will be dropped in
favor of the "k". This should klear up konfusion and keyboards kan have 1 less letter.

There will be growing publik enthusiasm in the sekond year, when the
troublesome "ph" will be replaced with the "f". This will make words
like "fotograf" 20% shorter.

In the 3rd year, publik akseptanse of the new spelling kan be expekted
to reach the stage where more komplikated changes are possible.
Governments will enkorage the removal of double letters, which have
always ben a deterent to akurate speling. Also, al wil agre that the
horible mes of the silent "e"'s in the language is disgraceful, and they
should go away.

By the 4th yar, peopl wil be reseptiv to steps such as replasing "th"
with "z" and "w" with "v". During ze fifz year, ze unesesary "o" kan be
dropd from vords kontaiining "ou" and similar changes vud of kors be
aplid to ozer kombinations of leters.

Return to top of fun page